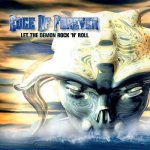 From Italy, the group Edge of Forever released a trio of powerful yet melodic albums in the new century, mainly Hard Rock bordering on Progressive Metal and Pomp Rock yet touched with AOR.

When it comes to Let the Demon Rock ‘n’ Roll, the band’s second album, catchy tunes such as “Crime of Passion,” “Mouth of Madness,” “One Last September,” “Feel Like Burning,” “The Machine,” and the title track barrel from the speakers with the force of a hurricane, while dramatic and hard-hitting ballads (“A Deep Emotion” and “Edge of Forever”) add variety. With his range, tone, and style of delivery, vocalist Bob Harris often reminds me of singers such as Glenn Hughes or Göran Edman. Meanwhile, bassist Christian Grillo and drummer Francesco Jovino construct a powerful sonic foundation, and the grand and rip-roaring instrumentation includes a perfect balance between Matteo Carnio’s blazing guitars and Alessandro Del Vecchio’s impressive “pompish” backgrounds and Prog-Metal-esque keyboard leads, which would seem almost right at home on albums by Time Requiem, Adagio, Space Odyssey, or basically any other group featuring Richard Andersson on keyboards.

And speaking of comparisons, the band’s overall musical style has much more in common with heavy yet occasionally commercial artists such as Rainbow, Heaven & Earth, Sunstorm, and Eden’s Curse as opposed to lighter and “pure” AOR groups such as Journey, FM, Babys, or Shy. So don’t let the AOR genre designation fool you—Edge of Forever has a mighty edge indeed, one that’s loaded with scads of hummable melodies.

Please also note, Let the Demon Rock ‘n’ Roll was produced by Bobby Barth, long-time vocalist and guitarist of the hard-rockin’ and melodic Florida band Axe, who may have aided Edge of Forever in keeping its style on this particular musical path.

Regardless, even through it’s been many years since the band’s lineup changed (leaving keyboardist Alessandro Del Vecchio as its vocalist) and its last album (2010’s Another Paradise) saw the light of day, Edge of Forever has subsequently signed a multi-album deal with Italy’s renowned Frontiers label and is supposedly working on new material for a comeback platter. Therefore, I’m thrilled to know the band has not fallen into oblivion, thus leaving my previous fears of possible dissolution in the dust.